Baby Was Photographed with the 1,616 IVF Needles It Took To Conceive Her 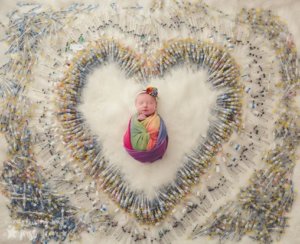 The single most special thing we can create in this world is new life. But, what happens when the body you’ve been given doesn’t allow you to have a child of your own? Some people accept their reality, some choose adoption, and others look to other alternatives such as in vitro fertilization (IVF).

And that’s exactly what Patricia and Kimberly O’Neill did. What they didn’t expect, however, is the challenging and seemingly impossible road they had ahead. Mothers everywhere will attest to the fact that having a child is no easy feat and the O’Neills story gives new meaning to that.

Patricia and Kimberly’s baby, London, was born on August 3, 2018. If you were to see her in the street, you would think she’s an absolute cutie. What many people aren’t aware of are the four years, three miscarriages, and 1,616 IVF shots in total (including the ones which sadly ended in miscarriage) it took to conceive their little miracle.

To commemorate their daughter, the O’Neills hired Samantha Packer of Packer Family Photography to take baby and family photos. Little did they know, Packer would capture the one shot that is inspiring and giving hope to people – especially women – around the world.