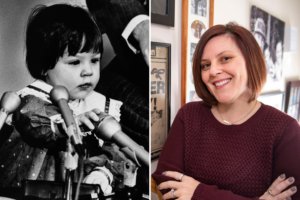 Elizabeth Carr, the first baby born via in vitro fertilization in the United States, turned 40 on Tuesday.

Few newborns enter the world with the kind of fanfare and controversy that greeted Elizabeth Carr — with a PBS film crew holed up in the delivery room and protesters raging outside the hospital.

It was Dec. 28, 1981 in Norfolk, Va., and the country’s first in vitro fertilization (IVF) baby was about to be born. “There was always media attention – so I knew I wasn’t born like everyone else,” Carr told The Post from her home outside Keene, NH, days before her milestone 40th birthday on Tuesday.

In fact, she first learned about her groundbreaking entrance into the world when she was around 6 or 7, at her doctor office with staffers watching the NOVA special on her birth. “My doctors were on each side of me, screening the documentary of my own birth with me — and explaining the science.”