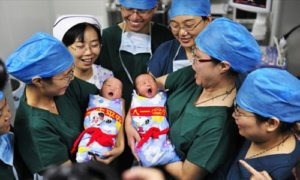 A Chinese court on Tuesday ordered a hospital in Wuxi, East China’s Jiangsu Province, to fulfil the contract of in vitro fertilization (IVF) and embryo transfer medical services for a local widow whose husband accidentally died before the procedure was complete.

The widow, named Xiaoqin (pseudonym), received IVF treatment at the hospital in May of 2017 alongside her deceased husband, with the hospital successfully cultivating four embryos for the couple.

However, Xiaoqin was immediately hospitalized due to overstimulation upon the egg’s retrieval.

However, Xiaoqin’s husband passed away in July of 2019. In order to carry on the family’s bloodline, Xiaoqin decided to continue on with the embryo transfer procedure.

However, her request was rejected by the hospital who claimed that they were not able to conduct the procedure without her husband’s consent according to China’s assisted reproductive technology regulations. In fact, the informal agreement signed by her husband had become invalid since his passing.

It’s now a crime for Colorado fertility doctors to impregnate patients with...