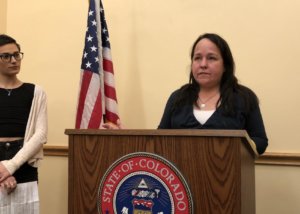 Money runs out before the compassion ever does under the golden dome of the state Capitol in Denver. It’s probably that way in your household budget.

That’s evident looking at an entirely worthy piece of legislation passed by the state Senate on March 10, bound for the governor’s desk.

House Bill 1158, called the Colorado Building Families Act, would ensure coverage for those with an infertility diagnosis. The bill is sponsored by a constellation of Democratic stars: Reps. Kerry Tipper of Lakewood, Leslie Herod of Denver, Sen. Faith Winter of Westminster and Senate Majority Leader Steve Fenberg of Boulder.

The law would “remove barriers and ensure all Coloradans can achieve their dreams of becoming parents,” Winter said.

Experts say one in eight couples have trouble conceiving naturally. Seventeen states require some level of fertility coverage, which raised rates, on average, a dollar a month, Winter said.

Judith Hoechst dreamed of having a family since she’d walked kids in strollers for family friends in the neighborhood. She worked for awhile as a neonatal nurse before going into family law.

After an infertility diagnosis, the dream was out of reach financially as she and her husband wrestled with student loans and a mortgage. One miscarriage after another broke their hearts and cracked their marriage. Sadness, hopelessness and feeling flawed hung over them like a veil for years.

Eventually, a home equity loan paid the $15,000 to implant three embryos which resulted in a “beautiful little girl,” she told me at the Capitol.

Two years later, they borrowed against their home again, and they had a little boy.

“Our children are our legacy, beyond any of our other achievements,” Hoechst said.

Fertility doctor is inundated with questions about coronavirus, egg freezing...