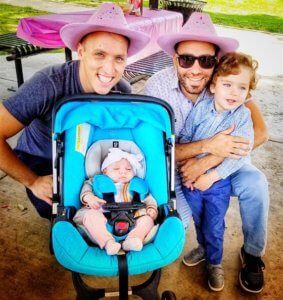 A gay married couple in Maryland is suing to challenge the State Department’s refusal to recognize the U.S. citizenship of their infant daughter, who was born in Canada to a surrogate mother this year.

The federal lawsuit, filed Thursday, says a State Department policy unlawfully treats the children of married same-sex couples as if they were born out of wedlock.

The plaintiffs, Roee and Adiel Kiviti, had their first child, Lev, in 2016; he was born in Canada via surrogacy and has had U.S. citizenship since birth. However, their second child, Kessem, was born in 2019, after the Trump administration began enforcing the Immigration and Nationality Act’s provision that children born “out of wedlock” do not automatically obtain U.S. citizenship.

Push in Germany for legalisation of surrogacy

How the Pineapple Became the Icon of I.V.F.
Scroll to top