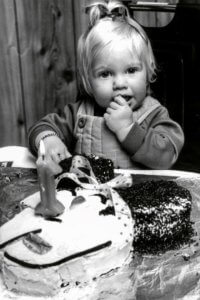 Since 1980, more than 200,000 Australian children have been born via IVF, but Candice Thum (nee Reed) was the first. This month she turns 40 and speaks exclusively to marie claire about life in the limelight and becoming a fertility advocate.

The birth of a baby is big news in every family, but on the day I was born it was front-page news across Australia. The year was 1980, Olivia Newton-John’s “Magic” was on high rotation on the radio, women were sporting big hairstyles and bigger shoulder pads, and I was born: Australia’s first IVF baby.

A 60 Minutes team had interviewed my parents when Mum was heavily pregnant and there was a crew in the room when she gave birth. It was a huge media story and the headlines seem very cringe-worthy now. “Candice Reed: Australia’s first test tube baby!” was one. It’s horrifying to think of children being called “test-tube babies” in today’s world, but it really shows how much times have changed.

People often ask what made my parents decide to become Australia’s first IVF parents, but the fact is they didn’t. They weren’t the chosen ones, they were just one of many couples at the Royal Women’s Hospital in Melbourne who were trying to have a baby using the latest technology.

It was simply luck that they were the first to be successful. My parents married knowing they wouldn’t be able to have children. As a young girl, Mum had appendicitis and peritonitis, which left her fallopian tubes severely scarred. She was told the devastating news that she would never have children when she was still very young.

Then miraculously they had my brother. After he was born, my parents tried for several more year but with no success. One day, my mum’s GP told her, “I’ve heard of this program in Melbourne that helps people like you get pregnant. Would you like me to refer you?” That’s how they met Dr Ian Johnson and the team at the Royal Women’s Hospital.

It’s now a crime for Colorado fertility doctors to impregnate patients with...
Scroll to top