Woman Serves as Surrogate for High School Friend Who Faced Cancer: ‘A Great Act of Kindness’ 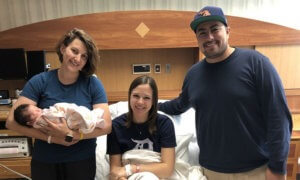 After being diagnosed with brain cancer three years ago, Katy Sanchez could have never imagined that in a few years, she would reunite with a high school friend who would change her life.

Sanchez, of Lansing, Michigan, was diagnosed with glioblastoma multiforme IV in 2017 after her optometrist discovered she had elevated intracranial pressure while examining her eye, according to Fox affiliate WSYM. The news was made even more complicated since it came just weeks after she exchanged vows with her husband, Joshua.

Just a few days after the diagnosis, Sanchez underwent an operation to remove the tumor and began a weeks-long course of both radiation and chemotherapy, followed by six months of chemotherapy. Because glioblastoma is challenging to treat and is known for a high rate of reoccurrence — leading to a low-rate of survival for a majority of patients — Sanchez opted to undergo a clinical trial at Cleveland Clinic. It has had great results, and the tumor has not grown back in the three years since she started treatment.

But due to the clinical trial, the couple was told they could not become pregnant because of the unknown effects the medication could have on a fetus, Sanchez told the outlet.

“Since it is unknown how the medication could affect a growing fetus, it would be unethical to become pregnant and continue to participate in the trial,” she explained. “Since the treatment has been very successful it wasn’t a choice for us to discontinue my cancer care treatments.”

Serving Those Who Serve? Access to IVF for Servicemembers and Veterans