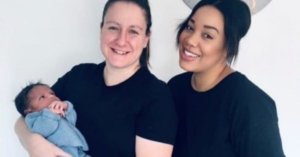 LONDON (CBS Local) — A lesbian couple have become the first in the world to carry the same baby in both their wombs as part of treatment known as “Shared Motherhood.”

The baby was born using In Vivo Natural fertilization technology, which involves the eggs, fertilized with donor sperm, being incubated in the mother’s body, rather than externally, which is the case with in vitro fertilization.

After the incubation of the eggs, they were taken out of Donna’s womb and placed into the womb of Jasmine, who carried the baby to term.

That means Donna is Otis’ biological mother, while Jasmine is his gestational mother.

The AneVivo procedure, pioneered by the Swiss technology company Anecova, was carried out at the London Women’s Clinic.

“You get a lot of same-sex couples where one person is doing the whole thing, and the one person is getting pregnant and giving birth, whereas with this we’re both involved in a massive way,” Donna told the Telegraph.

“It’s definitely brought us closer together emotionally,” she added. “We’re a close couple anyway but we both have a special bond with Otis as well which was helped by the way we’ve done it.”

The couple, who met in 2014 through online dating and married in April 2018, say Otis is doing “really good.”

Twin births in the US finally decline as fertility treatment becomes more c...

Baby Was Photographed with the 1,616 IVF Needles It Took To Conceive Her
Scroll to top